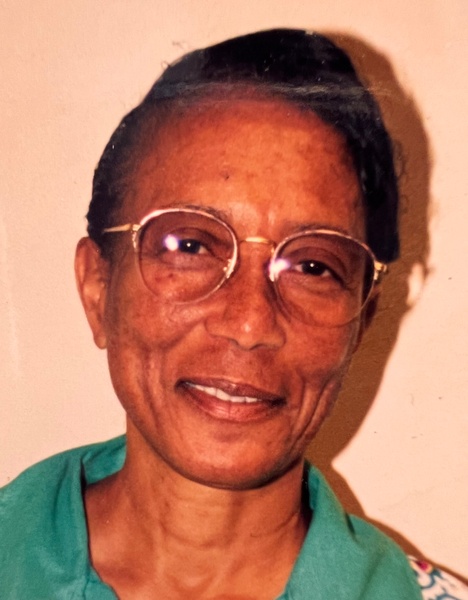 Mrs. Marie Thomas Parrish was born on October 23, 1937, to the late Mr. Jessie Thomas, Sr., and Mrs. Hattie Butts Thomas in Lee County, Georgia. She was the youngest of four children.

A spirit-led woman, Marie was definitely a believer. She read her Bible every night, and her faith in the Lord was a priority. For nearly 30 years, she was a member of McAfee Grove Missionary Baptist Church in Leesburg, GA; there she served as an usher.

Marital bliss did not escape Marie, for she was united in holy matrimony to James E. Parrish of Smithville, Georgia. To their union of love, they added two children.

As with many women of her generation, Marie was a stay-at-home mother and a homemaker who took pride in caring for her husband, her children, and her home. Later in life, she decided to venture outside of her home for employment. Marie became a certified nurse assistant. She took care of patients for some twenty years.

Sitting with her legs crossed Indian style, Marie would spend hours reading, doing crossword puzzles, and watching western shows on television. She was a giver and a helper; her happiness was often intertwined with her helping others to change their lives for the better. Marie was selfless, unfiltered, and unapologetic. She owned her every word, and most knew not to challenge her.

Marie leaves to cherish her memories, a loving daughter, Sonja J. Moss of Bronwood, GA; two loving and devoted grandchildren she raised as her own, Kenuona B. Parrish of Bronwood, GA, and Taiyentl T. Parrish of Jacksonville, FL; a loving sister, Mrs. Fannie Floyd (Willie) of Miami, FL; grandchildren, Lavica (Albert) Marshall of Morven, GA, and Lanica Moss of Americus, GA; nine great grandchildren; one great-great grand; and a host of nieces, nephews, cousins, and friends.